Here’s a list of some of the Brazilian carnival percussion instruments that we use to play our grooves. 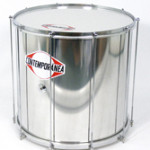 SURDO (soor-doh)
Surdos are large cylindrical drums with skins on both ends. Strapped over the shoulder the top skin is played with one or two beaters (depending on the style) producing a bass sound. The surdo rhythm creates the heartbeat in the Samba and provides the foundation for the patterns of the other instruments. 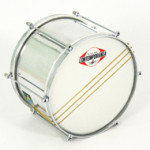 CAIXA (cash – a)
A snare drum found in most percussion ensembles in Brazil. Used to provide stability, swing and to drive the band playing either accents on to the beat or syncopated lines. 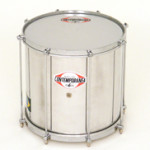 REPINIQUE (hepi-knee-key)
Also called repique, this instrument acts as the lead drum of a bateria in samba and calls intros, endings and breaks. It is a double headed drum which is tuned high. In samba it is played using a stick in one hand with the other hand playing slaps and open tones. In samba reggae repiques are played with two thin sticks..

CHOCALHO (show-cal-yo)
Chocalhos have a metal-frame with metal jingles. They are held with both hands and played with forward and backward movements provide excitement and drive in the music.

TAMBORIM (tam-bor-him)
Tamborims are one-headed drums about six inches in diameter and played with a thin stick or a plastic stick with several prongs. Usually short repetitive patterns are played on it and in a large group there is often a section of tamborim players playing fairly long phrases which punctuate the music.

AGOGO
Coned shaped, metal tuned bells attached to a handle. Usually there are two bells, a smaller high-pitched bell and a larger lower pitched bell. There are also sets of Agogos with 3 or 4 bells. They’re played with a wooden stick, creating a melody using the different tones.

APITO
Apito is a whistle. In Samba single-toned whistles (like the referee’s whistle) are used to start, stop and announce band calls. Tri-toned whistles are used for playing syncopated patterns.

TIMBA
Timbas have a conical wooden shell, a plastic skin and are played with hands. You get a deep bass, dry open tones and sharp slaps all on one instrument! Great for soloing, grooving and unison phrasing.